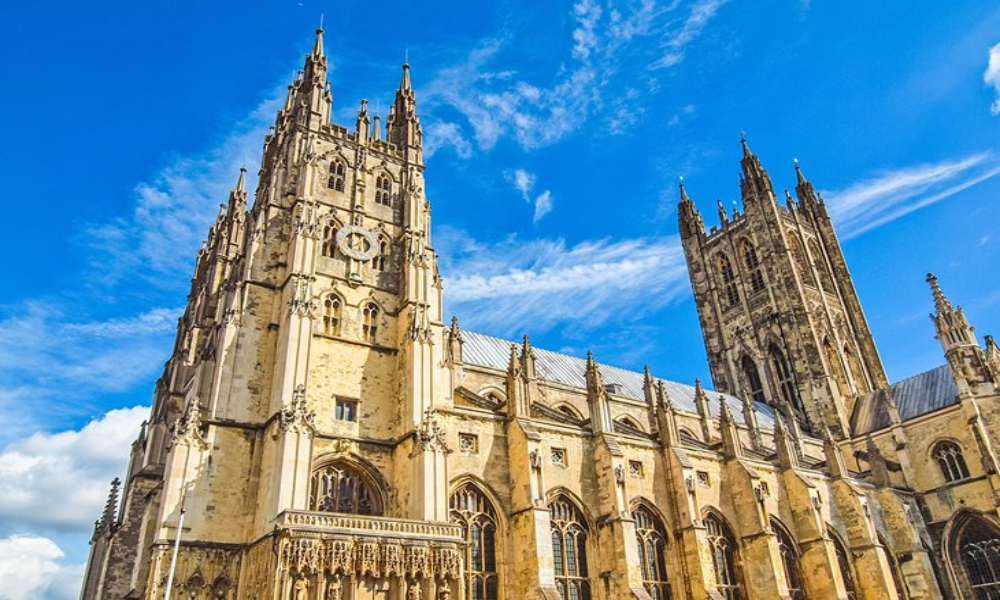 Nestled in the rolling green countryside of South East England on the banks of the River Stour in Kent is the ancient city of Canterbury. Home to Geoffrey Chaucer and the inspiration behind the iconic Canterbury Tales, this old town has a rich history and unique character. It is a place with tradition and deep-rooted folk and religious history. Walking through the narrow streets whose cobblestones are smoothly carried by the centuries of people crossing the streets, you will eventually feel transported to 15th century England. These historical remains of so many buildings here still date back to the time of the occupation of the Roman Empire and as part of the UNESCO World Heritage Sites remains today one of the most popular cities to visit in all of England. Everywhere you seem to be spinning in this beautiful city you will come across an old street with some sort of story behind it, but here are some of the must-see sites in Canterbury, England.

This beautiful cathedral is the oldest and most famous in all of England, dating back more than 1,000 years and was once an important pilgrimage site for early Christians. It is home to the grave of the Black Prince, the formerly beloved Prince of Wales, as well as Archbishop Thomas Becket who was once murdered here. You can walk through the 12th-century choir; view many of the rooms that were once the center of religious life in Canterbury. It is an important glimpse into Canterbury history and certainly a must-see site and the most visited places in the city. But the ruins of the old Saint Augustine’s Abbey can also be found here because it is technically outside the old city walls, many tourists miss it, but it is also an important look at English heritage.

You can’t visit the city of Canterbury without feeling like you’ve stepped into history, especially if you close your eyes and pretend you don’t see the GAP in a building so old it makes your head spin. Located in the historic St. Margaret’s Church, you can travel back nearly 500 years as Geoffrey Chaucer’s famous poetic masterpiece is reenacted for visitors. It is one of the most popular tourist attractions for a reason. The story of Chaucer’s colorful characters on their pilgrimage from London to the Great Cathedral of Canterbury is simulated as it tells not only the story but also the history of England in the 15th century and medieval life.

All that remains of this castle, the oldest in all of England, is some crumbling stone walls. Once a royal castle and then a prison, it’s essentially been a ruin since the 18th century, but it’s still a fascinating look at medieval England. The roof has long since fallen and all that remains are some crumbling walls. You can still climb one of the restored towers or take a tour of the ancient Roman wall that once protected the entire city from invaders. Surrounded by a beautiful and peaceful garden, the remains of the castle are still a popular stop on most tourist lists.

Canterbury’s ancient history began with the early Roman occupation. They built walls, fortifications, and other buildings, many of which are in ruins. The Canterbury Roman Museum takes visitors through the city’s earliest history. This fascinating museum takes you through what Canterbury looked like a thousand years ago, from the street to the homes and remnants of everyday life. You will find rare tools, an ancient Roman gate, tiles, mosaics, and much more. It is on Butchery Lane, not far from Canterbury Cathedral.

Hop aboard a small boat and experience the city in a truly unique way. The 40-minute tour takes you from the small Franciscan island known as Greyfriars, past centuries-old buildings, and King’s Bridge, built-in 1134 AD, you wind past Old Weaver’s House and many of the remaining 16th-century wooden houses. This guided tour runs throughout the day so you can hop on and off if you wish and listen to the stories and history of the city.

South East England and the countryside around Canterbury are incredibly beautiful. The extremely old Blean Woodlands takes you between the shady trees and the picturesque forest, an important nature reserve. You can go horse riding, walking or cycling here and there are even restaurants and pubs nearby when you complete your walk. Druidstone Park is another wonderful place to spend an afternoon with your family. In the spring and summer, the park is filled with colorful

Share. Facebook Twitter Pinterest LinkedIn Tumblr Email
Previous ArticleCambridge Travel Guide: Things to do on your next visit to Cambridge
Next Article Career Guidance: Discover the unique way to secure an apartment in Canterbury as a student
- Advertisement -